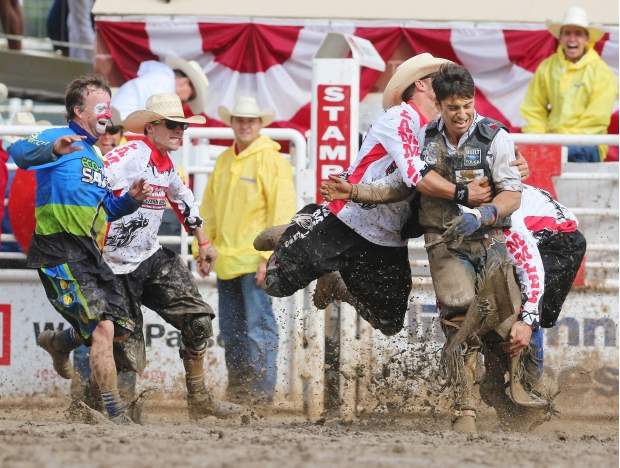 There’s nothing more fun than watching cowboys play in the mud.

They had every opportunity to seize the moment on $1-million Sunday at Calgary’s Centennial Stampede.

The best in a series of special moments came at the end.

Canadian bull riding champion Chad Besplug, jogging toward the infield stage to accept a cheque for $100,000, was mugged by the bullfighters and drilled into the mud.

“I heard some splashing, turned around and they were there,” the Claresholm cowboy chuckled.

And at their mercy. In an afternoon of twists and turns, the bull riding showdown went to a tie-breaking rideoff when the only three qualified finalists were all thrown off.

Proctor, who wound up clinging to the side of his bull for the last three ticks of his eight-second duel, was tagged with a low 66.5 point score.

Roy looked like he locked up the title with an 86 in a rematch with a black left spinner named Riskey Remedy.

But, Besplug had the last word and chalked up an 87 on the Big Stone Rodeo brindle bull Kish This that Bruce Sunstrum purchased out of California.

They had been dance partners earlier in the Stampede — on Day 2 when Besplug earned 86 points to win the round.

“I thought he was a little jammier today,” he said.

At one point in the ride, the 26-year-old got himself in a spot of turmoil.

When asked what he’d do with the money, Besplug, to roars from the crowd, told them he was going to Disneyland with his travelling partners.

“Me and Tyler Thomson were joking around that Tanner Byrne and Ty Pozzobon are like our little kids, they’re just out of their teens,” he explained. “We said if one of us wins the Stampede he’d have to do something special for everybody.

“The two kids said ‘we want to go to Disneyland.’ So that’s what we’re doing.”

“One year i was driving here and the other year I was here and watched it,” he said. “I couldn’t have been happier in that moment and I can now imagine how happy she was. It’s pretty cool.

“I remember driving in here today, I got goose-bumps thinking about all of the cowboys who have been here before and now just to be a part of that history is pretty amazing.

Besplug was the only Canadian to win outdoor rodeo’s richest one-day prize.

There were two repeat champions, Oregon’s Trevor Knowles in the steer wrestling (2009) and Iowa’s Wade Sundell in the saddle bronc riding (2010). He celebrated by doing a belly flop in a pool of mud in front of the chutes, prior to his presentation ceremony.